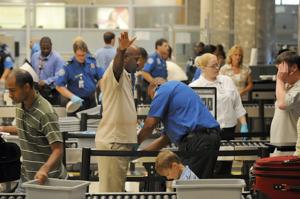 The Transportation Security Administration has apologized for an incident in which a breast cancer patient was subjected to a TSA pat-downthat she says she found “insulting” and “humiliating.”

Lori Dorn wrote about the experience on her blog. She described how, after walking through an image scanner at New York’s John F. Kennedy Airport, she was asked by a TSA agent to step aside to have her breasts examined.

“I explained to the agent that I was a breast cancer patient and had a bilateral mastectomy in April and had tissue expanders put in to make way for reconstruction at a later date,” Dorn wrote. She said she explained that because of this, she was not comfortable having her breasts touched.

Dorn asked the agent if she could retrieve a medical card from her pocket which described the expanders and included contact information for her doctor. But the agent called over a supervisor who denied the request, and said the breast exam had to take place.

According to Dorn, the supervisor added, loudly enough for other passengers to hear: “And if we don’t clear you, you don’t fly.”

In the end, Dorn wrote, “I had no choice but to allow an agent to touch my breasts in front of other passengers.”

In a statement to NBC New York, a TSA spokesman said that Dorn should have been allowed to retrieve her medical card, and that she should then have received a “more compassionate response from our officers, such as an offer on our part of private screening.”

The statement added: “The Federal Security Director for JFK personally reached out to the passenger to apologize and learn about her experience to help ensure a smoother checkpoint for passengers in similar circumstances going forward.”

The statement also said that the TSA would “be looking at refreshing some training to use this as a learning opportunity.”

The incident is only the latest in which the TSA has been criticized for what many see as overly aggressive screening procedures. In June, the agency came under fire after forcing a 95-year old cancer sufferer to remove her adult diaper before boarding a plane.