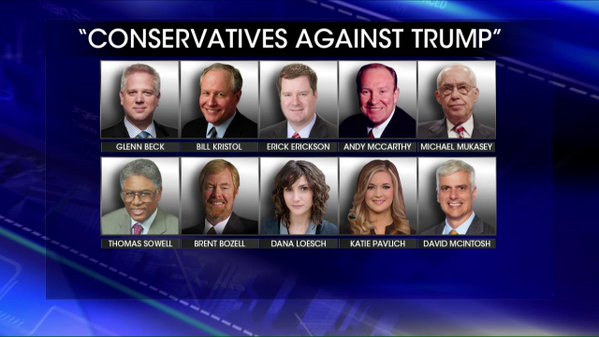 The gauntlet is finally being thrown down against the rise of the false conservative Donald Trump. For the record STR has come to Trumps defense on occasion, this movement to stop him has to do with holding to principles and values we have been standing on for years as Katie Pavlich explained. Trump’s supporters will argue he made the change to conservatism just like Reagan. Here’s the problem, Reagan made the change, lived and breathed it over decades, Trump’s change is practically overnight.

Trump NEVER speaks about the Constitution let alone the Constitutionality of his agenda. He thunders away on obama’s Executive Order power grabs, promises to undo them BUT will do “better ones”!? NO, WRONG true conservatives do not want a dictator using the same abuse of power that their predecessor used!

Speaking of his predecessor look at how Trump treats anyone who who disagrees with him. The constant petulant attacks, berating and insults are not traits of conservatives let alone the President of the United States.

There was issue with Trump reciting a bible verse recently. This man claims he has a room of bibles and is religious. Why did he need someone Tony Perkins of the Family Research Council, to write out a verse for him and then say it incorrectly if he is so religious? Then like obama he blamed Perkins for the error. The man never takes responsibility for anything he does that is wrong claiming he hasn’t sought forgiveness. NO ONE IS PERFECT!

Trump NEVER speaks of small govt. He talks about how he will replace people because they’re “dumb and stupid” vs saying this dept or that agency needs to go. In all of his YUGE speeches when has Trump ever talked about reducing the size of government?

In his defense he has made some great arguments about radical islam and immigration but he didn’t start the conversation on them. For the record the bill to build a wall/ fence was passed years ago but our corrupt inept Congress has failed to move on it. It is our current failed leader who chooses not to unleash the full power of the US military to kill islamic radicals. The military is ready to go, they just aren’t getting the order to kill!

Trump is a man who plays both sides of the court. He has more or less admitted that he buys favors from the very people, establishment, he allegedly detests but now praises support from! He is the opposite of the pendulum people are flocking to in the same way they flocked to obama. We cannot have another four years of a power hungry leader driven by populism and his ideology. You all understand if he were to be elected and will fail delivering on all his promises this nation will literally tear itself apart.

The conservatives leading this charge will make their case in the coming days and weeks. Voices like Dana Loesch who was once liberal and now conservative helped championed the rise of the TEA Party and drive conservatism should be given extra attention. Please take a look at what they say and DO THE RESEARCH for yourself before making a final decision.