New Jersey Gov. Chris Christie has decided not to seek the Republican presidential nomination, people close to the governor said. 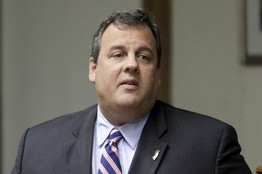 Mr. Christie will announce his plans at a 1 p.m. news conference in Trenton, N.J., ending weeks of speculation about his presidential ambitions.

The governor’s decision will dash the hopes of the many donors, operatives and leading figures in the Republican Party who have clamored for him to run. But it will help solidify a highly unsettled Republican field, likely giving a lift to former Massachusetts Gov. Mitt Romney, who has proven to be a steady candidate and holds a small lead in recent public-opinion surveys.

Mr. Christie’s decision eliminates one of the big unknowns still hanging over the Republican nomination. Only two potential contenders are still thought to be pondering a late run: former Alaska Gov. Sarah Palin and former New York Mayor Rudy Giuliani. But few in the party expect either will enter the contest.

Despite never saying he was actively mulling a 2012 campaign, and often making the case that he wasn’t even ready to be president, Mr. Christie’s flirtation with a possible bid ignited a flurry of interest among a slice of party elites and wealthy donors.

The push for Mr. Christie, 49 years old, to enter the race underscored the misgivings that many Republican donors and activists continue to have about a GOP field where no front-runner has been able to hold a significant foothold in national polls all year. Mr. Romney, for example, has support from only about a quarter of the GOP electorate in recent surveys.

Mr. Christie’s decision looks set to return the focus to the duel between Mr. Romney and Texas Gov. Rick Perry, who shot up in the polls since announcing in August but has since seen his support slump in national polls.

Which segment of the GOP electorate Mr. Christie would have seized remained unclear. The governor has garnered strong support from pockets of the party’s financial elite, which could have whittled into Mr. Romney’s base. But Mr. Christie’s image as a tough-taking state budget hawk could also have overshadowed some of Mr. Perry’s appeal with GOP ranks.

Some of the people urging Mr. Christie to run are fund-raisers and donors who could now move to Mr. Romney.

Christie backers touted the former U.S. prosecutor as a refreshingly brusque politician, unafraid to challenge the teachers unions and other entrenched interests in his largely liberal state. The web also overflows with videos of Mr. Christie tussling with opponents or arguing for pet causes with a verve and saltiness rare in today’s politics.

But Mr. Christie would have faced myriad challenges getting a campaign off the ground. With the first caucuses and primaries just over three months away, he would have had the shortest runway of any major candidate in decades.