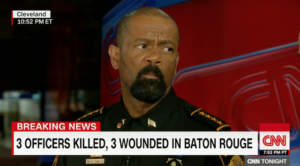 All I can say is WOW! Enjoy this clip of an intense exchange between a Patriot and regime propagandist. You can see it in Sheriff Clarke’s eyes he’s done with the nonsense from the left wing media enablers like CNN’s Don Lemon. The leftist media has done everything possible to legitimize Black Lives Matter who is nothing more than a hate group, who fits the FBI’s definition of domestic terrorism

Clarke took Lemon to the woodshed citing there is no data to support the narrative that law enforcement treats black males different from other races. Like a typical regime stooge Lemon used obama and the Washington Post as a data source; which I might add proves the leftist media goes out of its way to defend these radical leftist groups like BLM!

The problem in America isn’t racist bigoted bad police. It’s the people police are going up against who have no respect for the law and the leftist media who come in to support the “victim” of police shootings/ brutality who are generally felons that pushed cops to their limits up to and including trying to assault or shoot them!