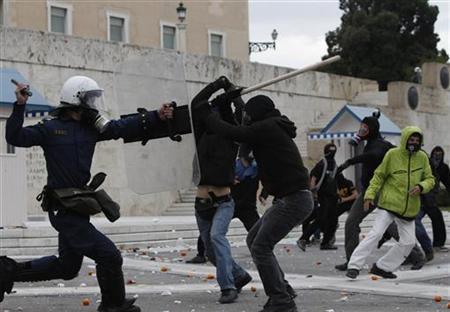 Familiar themes for those who lived through 2011, and investors should be ready to revisit them next year.

With a spiraling debt crisis in Europe, political upheaval around the world, and crumbling creditworthiness in major industrial nations, 2011 was a tough year to know where to invest. 2012 is unlikely to offer much respite.

The S&P 500, a measure of the biggest U.S. companies’ market value, spent much of the year getting pushed up and down, flummoxing shorts and longs – and scaring Moms and Pops away from stocks. It ended the year at 1,257.60, down a mere 0.04 of a point.

But the S&P 500’s tepid performance was encouraging, compared with other world equity markets. The United States may still be seen as a safe haven, though even that looks uncertain.

For every rally built on improving economic figures this year, selloffs were never far away on worries the European debt crisis would eventually drag the continent into a recession and perhaps the United States as well. That could continue in 2012.

China and other fast-growing emerging markets can no longer be leaned on as those economies slow. In 2011’s last half, the poorest-performing sectors outside of banks were most connected to global growth – materials, energy and industrial companies.

“There is a growing realization that the global economy is in jeopardy,” said Bruce Bittles, chief investment strategist at Robert W. Baird & Co in Nashville. “There is uncertainty in every corner of the world.”

U.S. equity funds had outflows in every month since May. More than $483 billion left U.S. mutual funds in 2011 through the year’s second-to-last week, even though the U.S. market outperformed foreign stocks late in the game.

The S&P 500 ended the year off a scant 0.003 percent, the closest it has come to unchanged since 1947, according to Standard & Poor’s. The Dow Jones industrial average.DJI finished 2011 with a 5.5 percent gain, while the Nasdaq Composite Index .IXIC slipped 1.8 percent.

Strategists say the U.S. stock market may benefit from reasonable economic growth and attractive market valuation. The S&P 500 is expected to rise 6 percent by the end of 2012, according to the most recent poll of Wall Street strategists.

When Wall Street gets back to work on Tuesday, it will face a holiday-shortened week and a slew of economic indicators. The most crucial numbers will come on Friday when the government will release the December non-farm payrolls report. Economists polled by Reuters expect a December gain of 150,000 jobs, compared with an increase of 120,000 jobs in November.

Volatility is likely to persist through early 2012 because of the uncertainty in Europe and rising concern about slowed earnings growth due to recent revisions.

The S&P 500’s price-to-earnings ratio – what investors are willing to pay for a dollar of earnings – is under 12, below the 25-year average of 15. In weaker markets like Germany’s DAX, the figure is below 9.

U.S. companies cutting earnings’ outlooks recently outpaced those raising theirs by the greatest ratio in 10 years. Some sectors, such as materials, have seen a sharp drop in forecasts for the fourth quarter, Thomson Reuters data showed.

Last week, downbeat earnings from Oracle Corp (ORCL.O) shook confidence in the tech sector’s health before the quarterly earnings season’s start in January. Oracle joined a growing list of companies, including some of technology’s biggest names, whose results and outlooks have set off alarm bells.

Next year, S&P 500 earnings are seen rising 9.9 percent, down from an estimate of 13 percent in October.

Many economists believe the euro zone is already in recession. They forecast that the economies of the 17-nation bloc will stagnate in 2012 after contracting in this year’s fourth quarter and the first quarter of the next.

Investors are worried that Italy and Spain will have to keep refinancing borrowings at unsustainable levels early next year, which could escalate the crisis.

The correlation between the U.S. stock market and the euro skyrocketed in 2011 as investors tied bets on risky assets to the euro’s moves. That trend ebbed as equities rallied near the end of the year, but it is likely to flare up again.

So far the U.S. economy has stayed on course for moderate growth. Economists expect it to expand by about 2.1 percent next year. But it is unclear how a slowdown in the rest of the world will affect the economy stateside.

The key may be China rather than Europe.

“China is the 800-pound gorilla in the room and is probably the most important country to watch in terms of their contribution to global growth,” said Michael Sheldon, chief market strategist at RDM Financial in Westport, Connecticut.

One of the pivotal events of 2011 was the downgrade of the United States’ perfect triple-A credit rating. Standard & Poor’s cited congressional bickering as the reason for the downgrade.

August’s stalemate in Washington over raising the debt ceiling sparked a selloff that accelerated after the downgrade.

Investors expect the gridlock in Congress to get worse as the U.S. presidential election approaches in November. The election is likely to be close, which will not make legislative efforts to tackle high debt levels and weak demand any easier.

Rancor was in view again in December as Congress struggled to pass a two-month extension of U.S. payroll-tax cuts.

“There will be less certainty about taxation and regulation so that will inhibit business formation and business growth,” said Brian Battle, a trader at Performance Trust Capital Partners in Chicago.

Goldman Sachs sees global growth highly susceptible in 2012 to even minor shocks – and those shocks may be political.

“Slowing growth (and in places outright contraction), public-sector cuts, and a renegotiation of the social compact between state and society in different parts of the world is an environment ripe for political turmoil,” Goldman said in a note to clients.