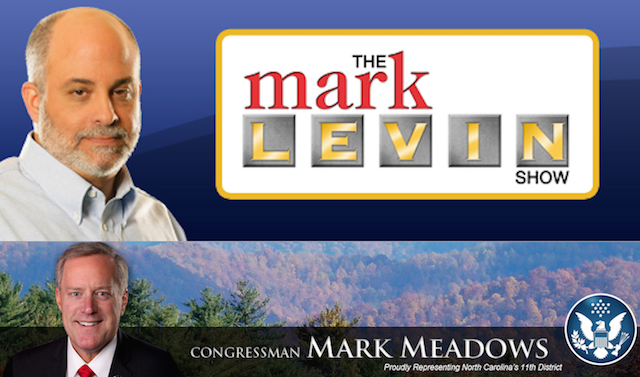 The first clip Mark Levin reads the declaration (below) by Rep Mark Meadows who has thrown down the gauntlet against the corrupt Speaker of the House John Boehner. Levin asks that people call their Representatives to lend support to Meadows who, like Sen Cruz, will now be under attack from the Washington Cartel.

In the second clip Levin speaks with Rep Meadows who lays out the case against Boehner who has ceded Constitutional power to the Executive Branch and has acted more in the interests of the democrats agenda rather than the nations.

America you say you want to see things change in DC, you want to see people thrown out then you need to get active and help this guy. Burn the phone lines demanding your Congressman/women to back Meadows. Boehner, McConnell, Pelosi, Reid and all the progressives in DC are going to go full-bore after Rep Meadows. We have to draw a line in the sand and start attacking these people. The days of sitting on the sidelines won’t cut it anymore and frankly it is that very attitude that has gotten us into the mess we are in.

Meadows Declaration:
“Declaring the office of Speaker of the House of Representatives vacant.

Whereas the Speaker of the House of Representatives for the 114th Congress has endeavored to consolidate power and centralize decision-making, bypassing the majority of the 435 Members of Congress and the people they represent;

Whereas the Speaker has, through inaction, caused the power of Congress to atrophy, thereby making Congress subservient to the Executive and Judicial branches, diminishing the voice of the American People;

Whereas the Speaker uses the power of the office to punish Members who vote according to their conscience instead of the will of the Speaker;

Whereas the Speaker has intentionally provided for voice votes on consequential and controversial legislation to be taken without notice and with few Members present;

Whereas the Speaker uses the legislative calendar to create crises for the American People, in order to compel Members to vote for legislation;

Whereas the Speaker does not comply with the spirit of the rules of the House of Representatives, which provide that Members shall have three days to review legislation before voting;

Whereas the Speaker continues to direct the Rules Committee to limit meaningful amendments, to limit debate on the House floor, and to subvert a straightforward legislative process; and

Whereas the House of Representatives, to function effectively in the service of all citizens of this country, requires the service of a Speaker who will endeavor to follow an orderly and inclusive process without imposing his or her will upon any Member thereof: Now, therefore, be it
Resolved, That the office of Speaker of the House of Representatives is hereby declared to be vacant.”