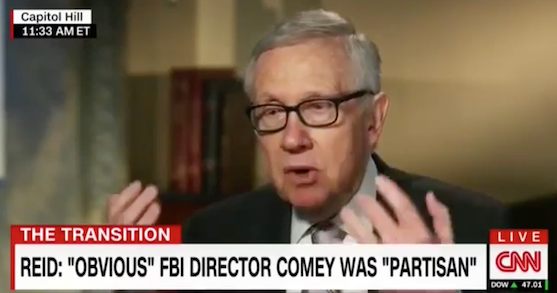 He is supposedly retired, but Harry “Dingy” Reid, like obama and Hillary, will continue to meddle with the nations business. This old, miserable, vile, evil kook wants the nation to believe the Director of the FBI conspired with the Russian President so Trump would win the election. That means he is trivializing even dismissing each and every American who went to the polls and voted for Trump.

Since Nov 8th the democrats have cooked up every excuse possible for Hillary’s loss. They blamed fake news, said it was racists, voting machines hacked, ballot tampering, the FBI, Fox News, alt-right… do you see what they’re doing? Dems are probing, they’re throwing spaghetti on the wall to see what will stick with voters who feel they were disenfranchised and/ or those who hated both candidates. Since there is so much distrust with Russia they’re running with this theory Russia interfered with the election.

Let’s assume they did, they could not have done sufficient damage to throw an election. This is almost like the nonsense that was being said about the NeverTrump crowd. They didn’t have the votes to propel their candidate to be the winner of the primary but all of sudden would have the power to throw an election! One thing is clear we have whole bunch of lunatics running around!

Why is it democrats, and progressive republicans, want an investigation into the election now but the same people were silent before the election with all the alleged hacking taking place? Why were they silent over the DNC allegedly being hacked and all those emails being made public? How come none of them are upset over DNC staffers ending up dead?

This is what democrats do, they lie. They make up stories to delegitimize any republican who wins an election. What they don’t understand is this one of the many reasons they lost and are a bi-coastal party! Keep it up dems, in four years you’ll be bitching again about losing!