Dem congresswoman Val Demings (FL) said the violence, destruction of property, fires, assault and terrorist threats we witnessed during the UC Berkeley riot was a “beautiful sight.” She took it a step further wanting to see more “we encourage people to get involved, what direction and instructions and how can we have a more organized effort, so that they can be a major tool and moving our agenda forward”! To date the democrat party as a whole has not spoken out condemning the violence, instead they have chosen to blame Milo, like him or not and/ or any conservative at this point, for invoking his right to free speech.

This comment by Demings seals it for democrats owning this barbaric behavior by the radical leftists they pander and enable. Demings like Maxine Waters is in fact engaging in an act of rebellion or insurrection and should be brought up on charges… maybe they will when we have a new Attorney General, but don’t hold your breath.

The left is, as Scott Baio explained, in the “last throws of a dying party” from a terminal case of Trump Derangement Syndrome which has made them extremely dangerous. They have nothing left to stand on, they’re looking for an outright fight and we’re only 2 weeks into the Trump presidency! What do you think is going to happen when more of his agenda is pushed through? Don’t dismiss these people, don’t trivialize their threats. Prepare America, because these people truly believe this is war! 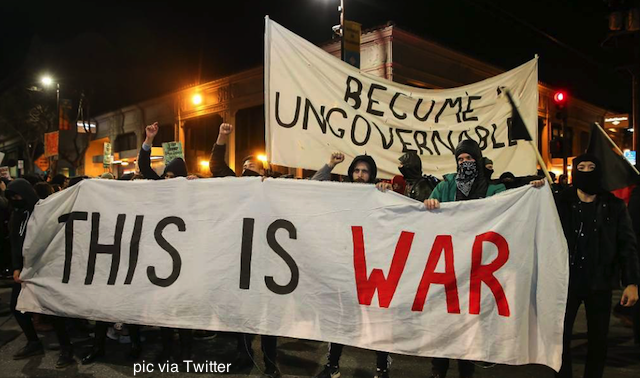