First things first. The Left as whole, from politicians to media and everyone in between, OWN Antifa, BLM, Occupy and whatever the next incarnation is of modern-day Brownshirts doing the Left’s dirty work. Reuters posted the tweet below calling anti-Trump protesters “peace activists”, only to remove said tweet and issue a correction… doesn’t matter they OWN them. 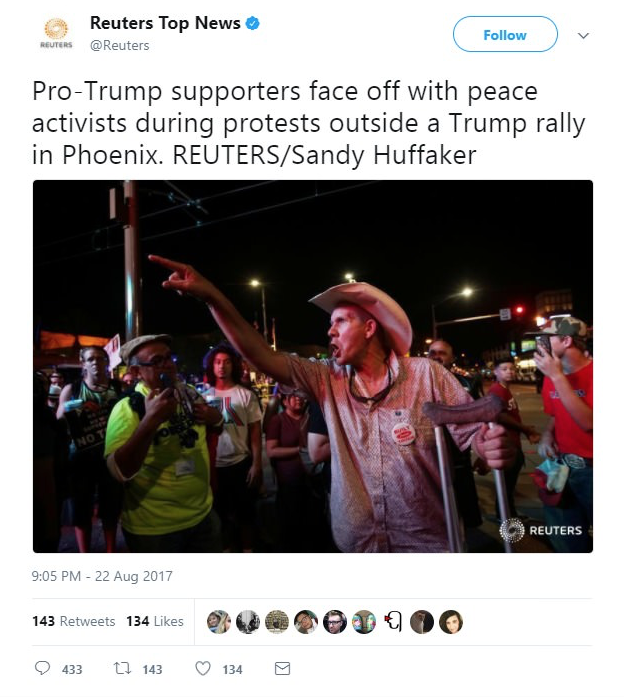 CORRECTION: We have changed the caption of this photo, which inaccurately characterized the anti-Trump protesters as ‘peace activists’ https://t.co/vWgZZRvYb3

The ‘peace activists’, as Reuters put it, as expected couldn’t contain their rage engaged police and Trump supporters leaving the Phoenix, AZ rally.

Trump supporters in Phoenix blocked from leaving rally before being assaulted by left-wing rioterspic.twitter.com/GxnrI2FZYL

These people are extremely violent all because Hillary Clinton lost the election, destroying all hope for an obama “third term”. Do any of these people understand what is going to happen to them when people on the right truly get fed up from being called nazis, racists, but more importantly assaulted simply because they have different political views? Does anyone on the Left understand they’re picking a fight with people who have been buying guns and ammo for 8 years straight?

Make no mistake about it, if Don Lemon is correct a civil war will break out and it will be a “gruesome massacre” to the least! It will be over pretty quickly seeing that this is a perfect example of the jackasses trying to start trouble.