Communists, radical Leftists (aka Antifa, BLM) and all in between are organizing nationwide protests starting Nov 4th to force Pres Trump and VP Pence out of office. These domestic terrorists claim the admin is fascistic in nature will of course employ fascist tactics to override the will of American voters with the goal the “regime be removed from power.” 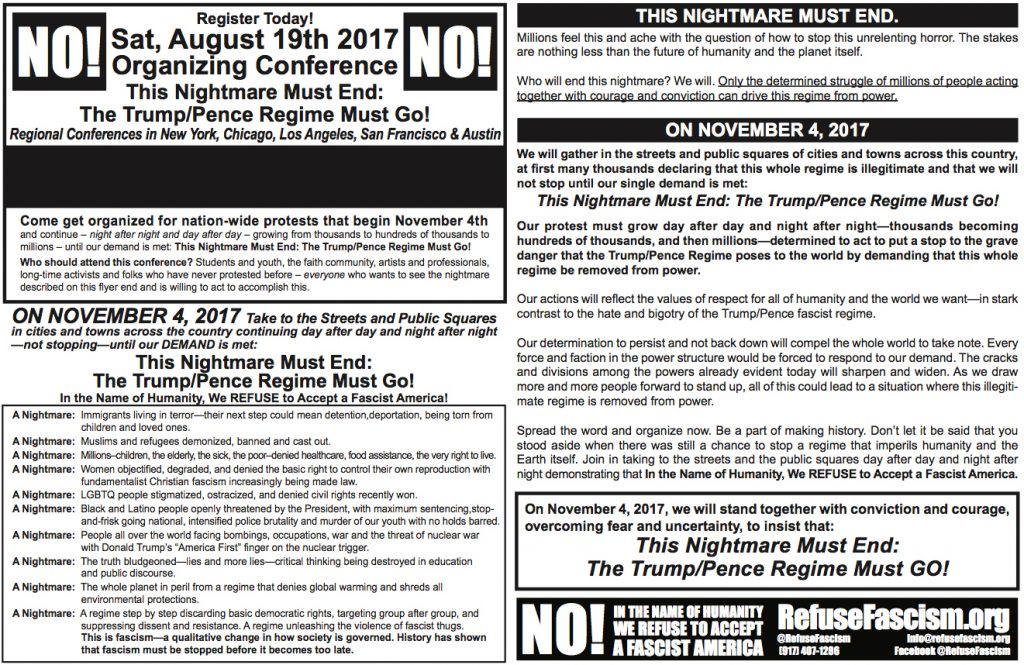 Take note these monsters are planning this protest to begin Nov 4th, but hope for it to go on for days. Yes, this is the next incarnation of Occupy, IF they actually pull it off, only more violent! Violence is right too, let’s be honest, based on their past actions these monsters will riot in all the cities and towns they’re being called on. The radical Left truly believes they can create enough pressure and havoc on America to force Congress to impeach both the President and Vice President of the United States. Why? Because their candidate lost, denied a third obama term.

This site was a Cruz supporter to the end, if Trump was doing anything illegal, unconstitutional etc it would be pointed out. The President is doing his job, fulfilling campaign promised that in effect many are reversing obama’s destructive policies. These radicals are upset because the free ride,free stuff, open border, lawlessness is over.

The only people looking to start civil war, Don Lemon, in America are these monsters with the support of democrat politicians and the fake news media, who’ve become political activists, all hell-bent on unseating Trump.

The only thing that will happen is mass arrests, a lot of fighting and pure entertainment for Normal Americans who have had it with all these whiny babies/ domestic terrorists. But you all can go right on ahead and try start your little war throwing rocks, bottles or balloons of human waste etc at heavily armed police, and National Guard if you push it. God help you all if you push Normal’s red button, we don’t have rules of engagement or anyone to answer to.

As for those organizing this pathetic attempt of a coup, it’s not surprising Refuse Fascism, along with Revolutionary Communist Party(RevCom), is backed by Alliance for Global Justice which is of course bankrolled by George Soros. This SOB and his bastard kids need to be brought up on charges of rebellion for inciting riots.