US Military launched an airstrike in Baghdad that killed Iranian commander Qasem Soleimani who WAS head of the Iranian IRGC’s elite Quds Force. (What was he doing in Baghdad!? Causing trouble thats what.) Soleimani reported directly to the Ayatollah, he ran the militia and terror operations around the world being responsible for 1000’s of deaths including American troops.

In 2018 President Trump issued a threat to Iranian President Rhouhani:

To Iranian President Rouhani: NEVER, EVER THREATEN THE UNITED STATES AGAIN OR YOU WILL SUFFER CONSEQUENCES THE LIKES OF WHICH FEW THROUGHOUT HISTORY HAVE EVER SUFFERED BEFORE. WE ARE NO LONGER A COUNTRY THAT WILL STAND FOR YOUR DEMENTED WORDS OF VIOLENCE & DEATH. BE CAUTIOUS!

….Iran will be held fully responsible for lives lost, or damage incurred, at any of our facilities. They will pay a very BIG PRICE! This is not a Warning, it is a Threat. Happy New Year!

This airstrike against one considered a big fish was clearly in response to the recent attack by Iranian militants in Iraq against the the US Embassy.

4:30 AM (IQ time): Iraqi protesters at Baghdad’s Tahrir Square are celebrating the death of Qassem Solaimani in a US airstrike. #Iraq pic.twitter.com/Fw5BmQm2yX

not everyone is happy about this news, one being fmr LIAR and obama advisor Ben Rhodes….

Congress has to assert itself and determine exactly what our Iran policy is. Did we mean to do this? Do we have any plan for what comes next? What is the legal basis for all this?

Trump may have just started a war with no congressional debate. I really hope the worst case scenario doesn’t happen but everything about this situation suggests serious escalation to come.

then we have Sen Chris Murphy…

Soleimani was an enemy of the United States. That’s not a question.The question is this – as reports suggest, did America just assassinate, without any congressional authorization, the second most powerful person in Iran, knowingly setting off a potential massive regional war?

CNN of course is weighing-in in their own “unique” way… 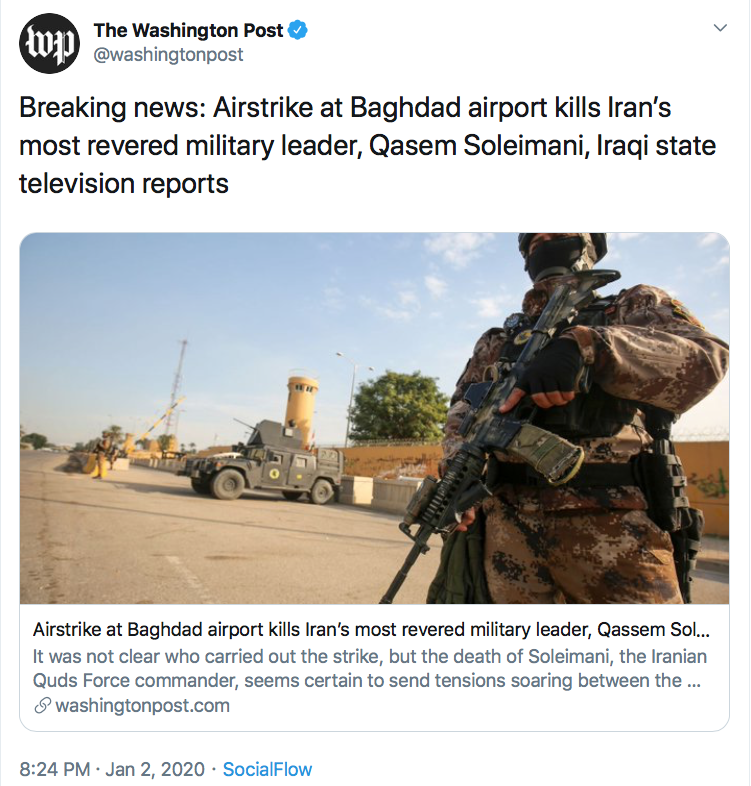 This is a MASSIVE victory for the US and our allies. But with fire comes fire, so US Forces are on full alert, the White House is prepared for any and all responses by the Iranians. They try anything Trump will blow them off the face of the Earth.