Another jobs report is out demonstrating time and again there is no recovery, no job or economic growth. None of the lies that comes out of this administration about the state of the US economy is good. Only the US govt could say the unemployment rate dropped to 4.9% from 5%, while reporting 425K people have left the labor force in the “same breath”! BTW how convenient this report comes out 4 days before the election some will argue in Clinton’s favor!

Per the Bureau of Labor Statistics, this is the govts numbers not STR’s, the same govt you know who cooks the books as it is to make things look good…

To put those numbers into perspective…

… that’s a lot of people looking for work! If you think this analysis is bs then answer this simple question: How can the unemployment rate remain around 4.9-5% while more people are out of work?

This BLS report proves the feds are misleading the public about the current true unemployment rate which is and has been holding at 22-23% for years. (When calculated correctly). 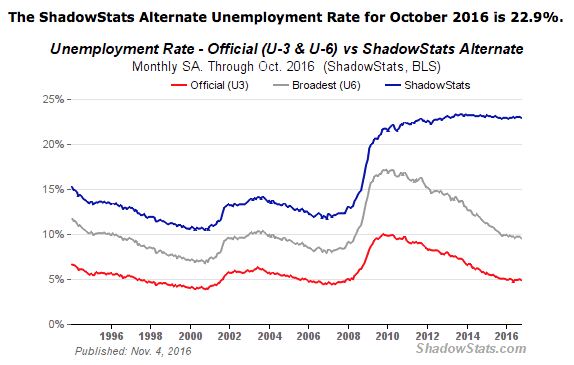 The UE rate is just shy of being at Great Depression era levels (25%), yet obama and Hillary Clinton are campaigning today praising the report!

These economic reports in fact show a stagnant economy in the eye of the storm of a stealth depression. When the markets finally give those in power will not be able to hide the truth we all know let alone stop the economic collapse. Are you aware the stock market has been dropping for 9 consecutive days, the longest in 36 years?!

The powers that be keep news like this quiet and have been lying to us for years if not decades as they prop up our economy with printed money and tweaked economic numbers.

Spend your money wisely America, buy what you need, buy things of quality because all that paper money is going to be worthless when the final bubble bursts!