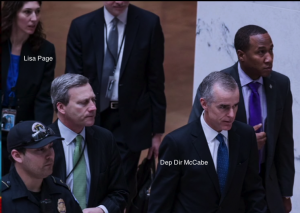 Late Sunday FBI Dir Christopher Wray visited the Capitol and read the 4 page FISA memo, GOP members have been adamant Americans need to see over corruption within the DOJ/ FBI. Couple that with the Strzok-Page texts conspiring and mentioning him, “Andy”…
“I want to believe the path you threw out for consideration in Andy’s office, that there’s no way he gets elected, but I’m afraid we can’t take that risk. It’s like an insurance policy in the unlikely event you die before you’re 40,”  over their conversations of an “insurance policy” and secret society”.

Today it was announced Deputy Dir Andrew McCabe, a Comey loyalist who is connected with the cabal operating within the FBI engaged in a soft coup against Pres Trump, was removed!

“He was really the Chief Operating Officer of the FBI. Nothing happened without his say so, and he was part of what people called ‘Comey’s skinny inner circle’.”

Well now, for a memo dems tout is full of misinformation, completely biased by the GOP, where one went so far as to suggest it’s “brainwashing”, there must have been something in it to trigger McCabe’s departure?

Conveniently for McCabe he is taking what is called a terminal leave which means all the sick, vacation and other paid time off he has accrued, but not used, will be used now and then his is officially out in March. By taking advantage of this provision this Comey/ obama/ clinton loyalist will retire with full benefits!

That’s one down, many more to go who should be going in handcuffs!