…Calls for 90 Million People in the Streets 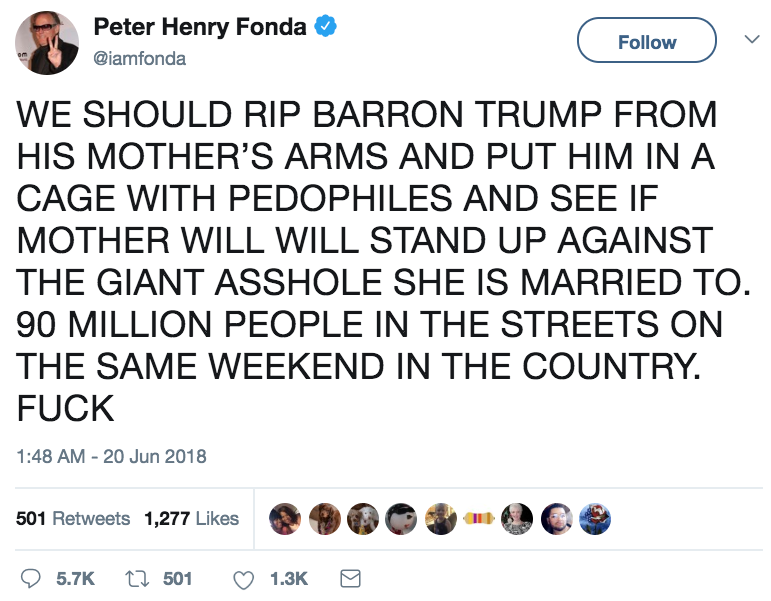 Hollywood tough guy Peter Fonda attacked the Trump family in a tweet calling for Barron Trump to be kidnapped from Melania Trump’s arms, put in a cage with pedophiles following the manufactured outrage over illegal aliens families being separated at the border! Just like the typical spineless Hollywood elitist Fonda is, he deleted the tweet but the internet is forever (thank you TDC for catching it).

Not sure whats more disturbing the tweet or the 1.3K likes and 5K comments before the coward deleted the tweet!? Granted some who vehemently disagree and find what he said beyond offensive will save it for reference as another example of how dangerous and violent Leftists are, but many hit that heart button because they genuinely agree with him. This mess with illegal immigration is NOT Trump’s fault, the blame goes to the Clinton admin and anyone still in office who played a role with the legislation that created the mess. As for the comments to his tweet, same argument can be made but it’s safe to bet the majority were in support.

This is today’s Left. They are unhinged, dangerous and violent. What people of influence like Fonda don’t understand is one of these days their words are going to become actions. They will own whatever happens and whatever response that follows. Sane normal Americans need to be prepared because the Left wants a fight. We’ve seen examples over the years when they have attacked people at protests, blocked roads instigating violence. What the Left doesn’t understand is that very soon the people they’re demonizing 24/7 are going to start hitting back… and they hit back MUCH HARDER.

Go ahead Petey call for 90 million to take to the streets watch and see what happens. We’re tired of the attacks, bullying and everything else you soulless, political opportunist degenerates on the Left have been doing and getting away with for years.

Leftists, the very same people who hate guns and don’t know which bathroom to use, are blatantly picking a fight with people who have been buying guns ammo at record levels since barack obama was elected.

These bullies, and that is exactly what Fonda is (besides a communist like his nasty degenerate sister), haven’t figured out a day of reckoning is coming their way.