An unhinged leftist attacked CA GOP candidate over the weekend at the Castro Valley Fall Festival with a switchblade. Thankfully Rudy Peters, who is challenging dem Rep Eric Swalwell, was able to fend this monster off with a campaign sign as his switchblade failed to operate and was later taken into custody. 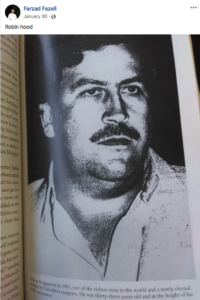 Who wants to bet this monster, Farzad Vincent Fazeli, (a big fan of Pablo Escobar) watches CNN, MSNBC religiously? Who wants to bet he frequents the NY Times, Washington Post, Huffington Post and countless other far left media entities? While we don’t know much about this monster, yet, we can safely assume he was motivated by what’s been fed to him from the media (ex they defend antifa) and outspoken democrat leaders (ex Maxine Waters), which is 24/7 hate-fest against Pres Trump, GOP and their supporters. It should be noted both have condoned this behavior by being silent or defending radicals as freedom fighters. The formula is no doubt the same as that which drove the Alexandria assassin.

For the record the reports of violence we see weekly is not republican/ conservatives lashing out violently against democrats/ leftists. It’s ALWAYS a leftist going violent over words and many times what one is wearing, be it a MAGA hat or pro-Trump shirt or what have you.

These people are beyond unhinged and dangerous, their rage is being fueled by what they see and read on tv and the internet. That is how weak and pathetic these people are, that they’re triggered by words and clothing!! IF the GOP holds on to House and Senate after the primary expect to see more violence, and come 2020 should Trump win a second term their will be violence in the streets.

Buy guns and ammo, you’re going to need them.

Farzad Vincent Fazeli, 35, was jailed after the alleged Sunday attack on Rudy Peters at the Castro Valley Fall Festival. Alameda County prosecutors charged Fazeli on Tuesday with a felony count of making criminal threats and misdemeanor counts of exhibiting a deadly weapon and possessing a switchblade…more