While investigators are already looking into where the “threatening letter” Jussie Smollett received originated, one aspect of it hasn’t been pointed out yet. The  letter, that did not get the attention Smollett had hoped thus causing him to escalate the hoax with a physical assault, was a potential act of mail fraud!!

It’s now being reported that Osundairo brothers are saying Smollett mailed a letter to himself, which was delivered at the ‘Empire’ set. On the surface when news of a letter was made public one assumed an addressed envelope, possibly with a stamp, containing the letter, dropped off where mail is delivered at the set. The story then goes Smollett and a ‘Empire’ producer were concerned from the appearance of the envelope proceeded to open it wearing gloves and were exposed to a white powder, which turned out to be crushed aspirin. 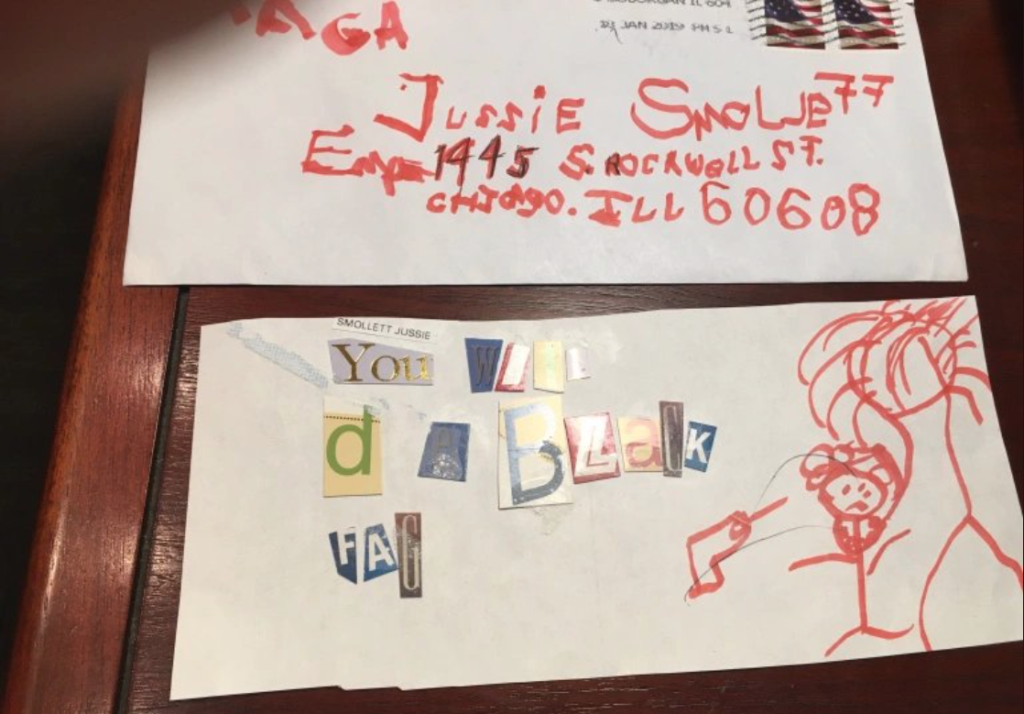 The problem for Jussie aside from just sending a threatening letter, is he put the letter in the US mail system where it was postmarked. Crazy people leave threatening letters for themselves or others, for whatever their intentions, all the time, but the moment you use the federal mail system you’re playing with a whole new set of rules that includes A LOT of jail time!

18 U.S. Code § 1341. Frauds and swindles
“Whoever, having devised or intending to devise any scheme or artifice to defraud, or for obtaining money or property by means of false or fraudulent pretenses, representations, or promises, or to sell, dispose of, loan, exchange, alter, give away, distribute, sup……”

Smollett devised a scheme to defraud the public, media, Fox Entertainment, Hollywood and whomever else for whatever his end goal was with the letter, be it for more attention, to trash Pres Trump and his supporters or whatever. Granted one will interpret the law that there has to be a targeted specific victim, where some will claim there are none, but Smollett has in fact attempted to defraud the Chicago PD. He sent himself fake mail that would force the Chicago PD to investigate. CPD is the victim because they have spent time and money investigating a hoax/ fraudulent hate crime!

This guy is potentially looking at 20 years in federal prison all because he hates Trump, and wanted to allegedly save his job (Fox Entertainment denies his job was ever in jeopardy, but now because of this hoax he’s being written off). Smollett’s hate for Pres Trump and his supporters shows the lengths unhinged violent leftist will go through over their paranoia! They’ll do anything to make POTUS and his supporters look bad with no regard for the violence that could have unfolded, even to the degree of what many claimed a potential race war!

Imagine what leftists will do if they ever get the power they had when obama was president? These people are dangerous, do not take this lightly, they must be POLITICALLY exterminated from ever holding public office. Those carrying out hoaxes and fake hate crimes like Smollett MUST face heavy fines and jail time, no slaps on the wrist “time served” type sentencing.