Nancy Pelosi’s daughter, Christine, took to Twitter to praise Rand Paul’s attacker in response to a tweet about Mitt Romney going into quarantine, because he was in contact with Paul who has tested positive for the Chinese virus, and doesn’t want to put his wife who has MS in risk.

Christine Pelosi showing the typical hateful side of the democrat party, as well as her bloodline being the daughter of the worst House Speaker in US history, stated Paul’s neighbor was right….

Yes, she deleted the tweet but as we all know the internet is forever… 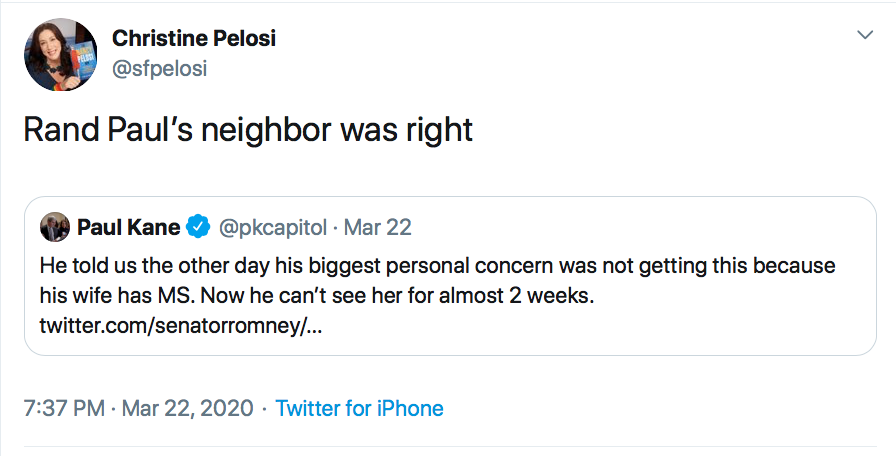 Rand Paul was viciously attacked in 2017 by his neighbor (a hardcore Leftists like the Pelosi’s) over a dispute about lawn care, resulting in five broken ribs and bruises to his lungs that required partial removal of his lung! Pelosi is praising the attacker that clearly suggests he had the right idea to more or less remove Paul from the Senate if not taking his life. There is no other way to interpret what she is saying in this simple tweet. In Pelosi’s mind had the neighbor gotten the job done Romney wouldn’t be afraid of getting his wife ill and separated from her for the next 2 weeks.

This is the democrat party. They HATE everyone who is not in goose-step with their agenda praising attackers of Senators and people on the right. They want you enslaved if not dead. So you keep that in mind over the next couple months going into this election. Watch what they say and do, from unnecessary wishes of harm like this to taking advantage of a national crisis to advance their agenda, democrats have proven they’re dangerous.