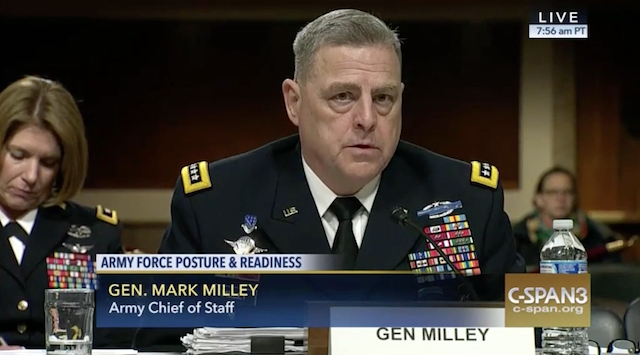 “…arming our people on our military bases and allowing them to carry concealed privately owned weapons I do not recommend that as a course of action.”

Every soldier who goes through boot camp is trained in the proper use and execution of weapons. They’re sworn and entrusted to defend this country with their lives if necessary but Army Chief of Staff General Mark Milley is against soldiers carrying “concealed, privately owned weapons” for personal defense on US military bases and facilities.

One would think after Chattanooga, Ft Hood, DC Navy Yard and many others someone would wise up to allow our warriors the ability to protect themselves but that’s not the case. When discussing Ft Hood Milley gave reason for his opposition stating “I am not convinced from what I know that carrying privately owned weapons would have stopped that individual”. The General apparently doesn’t know much because Ft Hood killer Maj Nidal Hasan was not killed, he was shot and paralyzed AFTER killing 13 and wounding 32. Eight minutes is too long General, if just one soldier that day was armed people would be alive and many wouldn’t be living with nightmare of being attacked left defenseless by their own govt.

This really isn’t surprising to hear anymore since so many tied to the obama regime want the people disarmed, it only makes sense to keep the military disarmed as well (thank you George HW Bush). They wouldn’t want an unhinged mentally unstable individual or any of their islamist radical friends to get shot while screaming allahu akbar before carrying out jihad.

This country has gone completely insane, fundamental transformation is about 95% completed at this point.