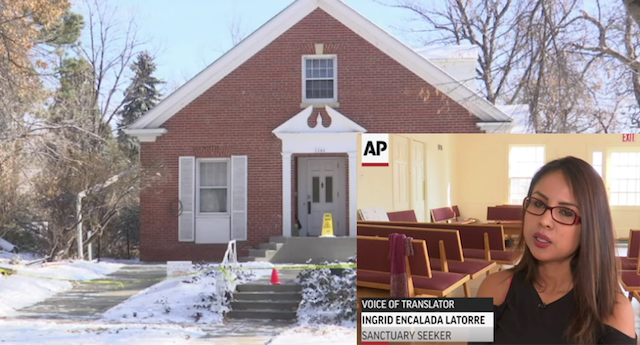 Illegal aliens are taking refuge (taking advantage) in churches to avoid deportation. Well that’s fine, these churches vowing to offer sanctuary to illegals probably cannot be forced to hand them over under the same rules as sanctuary cities…

However, breaking federal law by aiding, abetting and harboring illegal aliens is a crime punishable with fines and jail time. If the incoming Attorney General doesn’t want to go this route then maybe the new admin will have the IRS pull their tax exempt status over this and any other church violating federal law.

This is country of laws, we cannot reward bad behavior or make exceptions when the charity of churches is abused. While you feel for the woman in this clip, fact remains she broke the law and more importantly she has clearly made no attempt to assimilate to American culture, otherwise she would at least be speaking English! Parishioners can be sure their place of worship will be overwhelmed once this new tactic of illegals goes mainstream. Those who have a problem with illegal aliens who attend these churches might want to think twice when the collection plate/ basket comes around.