Justice Kennedy tendered his resignation from the Supreme Court this morning to Pres Trump and since then the Left has been in full meltdown.

Dems first reaction of the news during a DNC conference call

How it sounded inside a DNC committee meeting the moment Justice Kennedy’s retirement was announced pic.twitter.com/6S9uO2JGzQ

The biggest argument being made right now from all progressives be it Chuck Todd, Andrea Mitchell to Chuck Schumer is that the confirmation of Kennedy’s replacement should be held off until after the midterm election! They cite the “precedent” set in 2016 when obama wanted to replace Scalia with Merrick Garland where Mitch McConnell delayed the confirmation. It’s been a “tradition” to not appoint SCOTUS at the end of lame duck presidency, except when democrats are running things.

Will be interesting to see how some GOP senators rationalize the idea that it’s suddenly now ok to debate an open SCOTUS seat in an election year. They may fully pull that hypocrisy muscle.

Here’s the Left’s problem:
2016 was a PRESIDENTIAL election.
2018 is a midterm election.

There’s NO comparison, and for the record let’s go down memory lane to set the record straight:

Justice Elena Kagan was nominated by obama in May 10, 2010. She was confirmed by the Senate August 5, 2010 and then appointed to the bench August 7, 2010. The Midterm elections were Nov 2, 2010. I don’t recall anyone in the media nor Chuck Schumer speaking in the Senate to hold off Kagan’s nomination until after the midterm election.

This fact isn’t stopping countless progressives from proving how hypocritical they truly are. It was okay for obama to do it but not Trump. 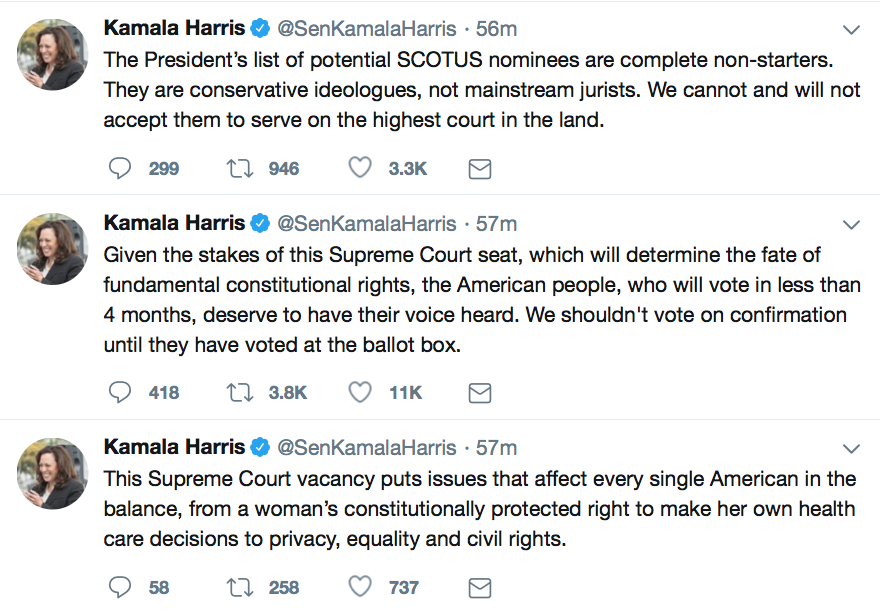 My statement on the retirement of Justice Kennedy.“The American people should have a voice in the selection of their next Supreme Court Justice. Therefore, this vacancy should not be filled until we have a new Congress.”

It is essential to call your US senators 202-224-3121 and demand no vote on a new SCOTUS Justice until after November. Let the people speak.

If there was ever a time to resist, to organize, to mobilize — it’s now. This fight will define generations to come. Time to step up. https://t.co/HSkuD9GI9h

The top racist in the USA getting ready to fight

We have no choice but to organize, strategize, vote and act. Ambivalent attitudes are not a option! All civil and human rights are at stake. What side are you on? https://t.co/rCo4u70u6l

#JusticeKennedy is retiring.After Trump was elected, many asked, “What’s the worst that can happen?”

This. This is the worst that can happen.

If anyone has any Trump tapes they’ve been holding onto until closer to the midterms, for the love of God release them now. 🤦🏾‍♂️

Stock up on abortions now. Roe v. Wade is gone.

More bad news. #JusticeAnthonyKennedy is resigning from the #SupremeCourt. We are in MAJOR, MAJOR trouble.

The Left just can’t handle the truth and will fight tooth and nail against ANYONE Pres Trump appoints to the bench. They’ll outright lie like they’re doing now to get their way.

If you thought things bad now, with harassment, protests and riots you ain’t seen nothing yet. Today’s announcement has sent Leftists off the deep end. Yes, if you’re wondering they’ve gone so far off they even have a petition to stop the nomination demanding Merrick Garland “or no one!”