Radical progressive group MoveOn.org, along with SEIU (you know obama’s FRIENDS), have taken the Fight for $15 campaign to a new low. They’re now telling people that ‘low wages are violence’! Yes America they have now taken to rewriting the dictionary, to equate stabbings, shootings, beatings, destruction of property, rape, war etc with low wages. 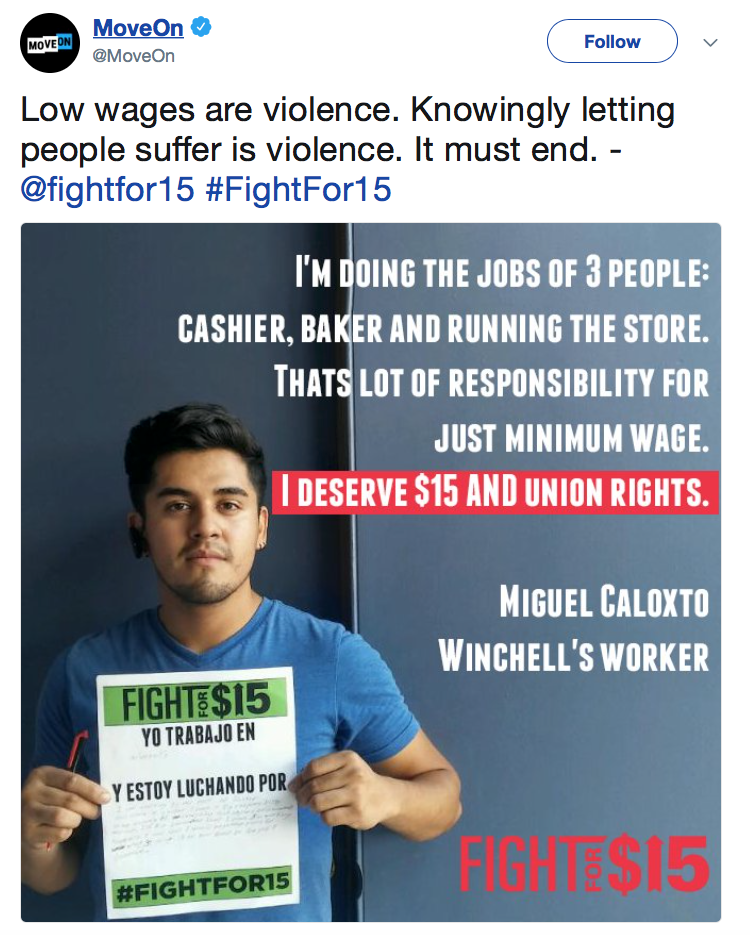 These organizations and pundits pushing Fight for $15 haven’t gotten the message that this push for higher wages for low-skilled work will result in more job losses! Apparently fast-food restaurants, like McDonalds, and supermarkets installing self-serve checkouts and kiosks hasn’t made it clear the worker demanding $15 an hour can be replaced with a machine.

This site WARNED machines would replace low-skilled uneducated workers demanding higher pay. It’s insulting that these people think they’re entitled to the same pay as those who put the time in to climb the ladder and went to school to get the jobs that pay higher wages. Their handlers at MoveON.org and the like behind this know what will happen, why they’re doing it is unknown. BUT remember the Left always has a long-term master plan behind every radical, destructive plan they start.

Those seeking higher wages for low-skilled work you need to hear every word here (originally posted in May 2015) and think twice before pushing this insanity any further. The jobs these people are holding demanding higher pay will be replaced by machines. The level of technology being produced is accelerating from self-checkout kiosks to robots that can open a bottle of beer, pour it into a glass and serve it. Those of you who will not stop this push for higher wages for low-skilled work are going to put a lot of people out of work. And no, those who lose their jobs will not be the ones building the machines… the machines are building machines!

All of you fast-food and low-wage workers demanding $15/hour ($15r’s) out there railing against McDonald’s, Walmart, Target etc claiming income inequality  you need a wake up call.

First off that part-time job you are holding was NEVER EVER MEANT to sustain a family of 3-4 let alone 9 (with 2 still at home).

These low-level jobs were established to provide two things to workers:

#1 To allow new workers (primarily teens and college students) to gain experience in the workplace. From learning to do tasks, deal with customers, handle cash, process orders etc
#2 Provide supplemental income to an individual with a full-time job, those retired on fixed incomes or again spending money for students.

Second, these jobs you handle flipping burgers, stocking shelves, running a cash register etc are LOW-SKILLED jobs. That means very little education and ability is required to perform the job. These jobs ARE NOT EQUAL to the low-end jobs (no disrespect to those who hold them) in other industries. In other words a burger flipper or cashier IS NOT EQUAL to a paralegal, medical assistant, mechanics(changing tires/oil types), (some) teachers and bank tellers.

Pay is based on skill level, education, knowledge and experience! Those of you seeking $15 an hour do understand that is more than what many professionals make!? You think running a register or stocking shelves makes you worth more than someone who got a 4 year education and is a biochemist? Seriously?

These demands protesters are making will leave companies with a few options, none of which protesters and their manipulative handlers at MoveOn.org or SEIU etc will like. If employers are forced to pay higher wages to low-level, low-skilled workers, they will have to:

1) … cut overhead. No problem right? Here’s the problem, since the 2008 crash companies big and small have all learned how to run lean. That means cuts have already been made in overhead expenses. Some jobs that were lost were never filled as tasks were delegated to remaining staff and companies learned they could operate with less staff. With technology making things easier there isn’t much more that can be cut from daily operating expenses

2) … raise prices. Another no brainer right? Wrong! Competition is fierce, companies have already reduced costs and expenses the last thing they want to do is raise their prices punishing if not scaring away their customers. While a minor increase in prices is possible it’s not economically viable long-term as costs beyond their control (rent/lease,electric, gas, supplies etc) always go up and will lead many to make drastic decisions.

3) … reduce workers hours. Many companies are already juggling hours and job status as it is because of obamacare (Thank you Sen John McCain for torpedoing it’s repeal). If companies are forced to raise wages they will juggle work schedules around even more to allow them to reduce the number of hours workers will work.

4) … fire staff. As pointed out in cutting overhead, companies are already (and have learned) running lean. If costs go up because of higher wages they will cut staff to stay in the black. That will mean more work for those who have seen their duties increase as it is. So who gets fired? It depends on experience and skill level! Some workers will be considered irreplaceable if they are relied on for many duties, but others who may be well experienced but possibly around too long at a higher wage who can be replaced with cheaper workers can go. But there is also another group of workers who can be let go…. the low-level, low-skilled worker! Yes that’s right $15r’s, companies just might cut you loose all together!

5) … automate. Those of you flipping burgers, twirling pizzas, running registers, sweeping floors etc do know the machines are coming don’t you!? The machines that can do your jobs have existed for a very long time (try 50+ years ⬇) but cost too much at the time.

That is all changing today. Have you noticed cashiers are being replaced with self-checkout? Point of Sale (POS) systems are slowly coming to restaurants removing the need for waiters and waitresses. Now all you have to do is input your order, swipe your credit/ debit card, the order goes to the kitchen and out comes a server with your food… a server who can easily be replaced with a machine too!

Keep pushing companies with unrealistic demands of high pay for low-skilled work and you can be sure you will be replaced by a machine. If you do the math on the cost of these machines (which are coming down) in the long-term companies win. Businesses will make back the cost of the machinery in a very short period of time and also be relieved from the headaches of employees calling out sick, no-shows, vacations, health insurance, taxes, SSI etc etc.

And all of this goes for those of you in manufacturing too! Do you think running a sewing machine is job security? Think again!
Think serving a drink or pouring a beer is a safe job? NOPE..

6) … if all else fails, shut the business down. If $15r’s, unions, special interests and govt force companies to increase wages when margins are insanely tight as it is some businesses might just close up shop. Can’t happen? Try again since we are already seeing it happen in Seattle, it WILL happen in Los Angeles and anywhere else businesses are forced to pay high wages for low-skilled workers.

As for successful small business owners who have “made it”. They made it they don’t need the headaches and threats. They made their money and will just walk away either shutting down or selling the business off to someone else who might do one of the above like automating.

Based on how easily you $15r’s can be manipulated by your handlers we can be sure you all will take to protesting when these things happen. Protest away, but you cannot force someone to not replace you with machines or keep the doors open. You $15r’s need to understand you have NO POWER over companies and all you are going to do is put yourself, and MANY Americans, out of a job.

Have we talked about 3D printing? Yeah just wait until that tsunami hits too!

Oh before anyone considers attacking this piece keep in mind yours truly is long-term unemployed completely written off by small and large businesses!