Fmr CIA Officer Brad Johnson tells OAN that the democrat confederacy’s “whistleblower”(aka anonymous informant, aka Schiff’s Snitch), Eric Ciaramella, described as a left wing radical, was recruited/ hand-picked by John Brennan for the White House! As we’re now seeing it play out, his objective was/ is to undermine the Trump Admin.

Listen to Johnson again as he explains Ciaramella, this guy isn’t some Van Jones hack, he is an operative whose made it a career to be engaged in radical left-wing operations. When you look at how things have been playing out, this was well planned out by Brennan to take out PRes Trump… and let’s be clear it was all being done under obama!

There is no other way to call what is going on other than a coup d’état. The Left and Deep State want Trump gone, because everyday he is in office all of their corruption is being exposed through countless investigations be by Journalists like Sara Carter and John Solomon to guys like Glenn Beck who is putting all the puzzle pieces together. None of this is about the Biden’s, it’s about the democrats, and most likely some RINO’s, who are screwing this country over. Under Hillary all of the corruption would’ve been buried but look at the headlines everyday, it’s amazing what is going on. These people are scum!

Guys like Brennan need to be prosecuted, which means AG Barr, US Atty Durham better move their asses because time is not on their side. While it’s unlikely there is a SLIM chance Trump could lose in 2020, which means all these investigations will be wiped out under a democrat White House. They can’t start indicting people come late Sept or the infamous October Surprise either. People need to be perp walked within the next 3-4 followed by trials with people headed to jail in 6-7.
Tempus fugit folks

One thing is clear Pres Trump needs to gut all obama holdovers from his admin, these people are engaged in acts of rebellion/ insurrection and sedition.

FYI Ciaramella’s name has been floating around for a while, not just the recent rush. I believe I saw his name being floated around on Twitter in September. #2 He was outed in a transcript from testimony released by the democrats, it’s common knowledge yet this post is being censored on Facebook. So please share this out as much as possible. 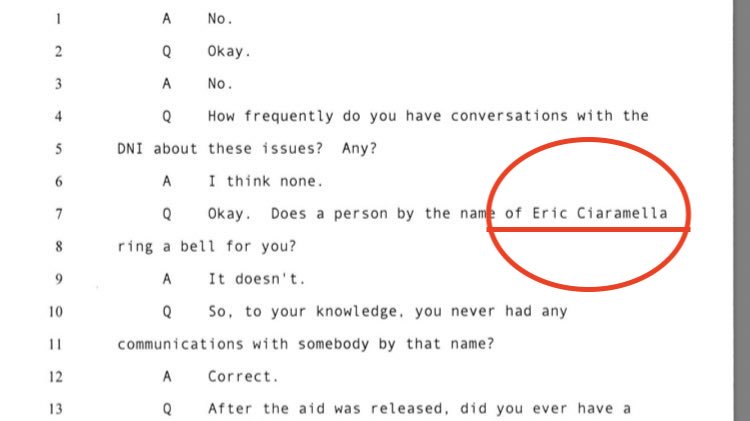