We’re going on 3 nights of total anarchy and there are no signs of it stopping after what just happened in Minneapolis, MN (a democrat stronghold). The rioters were issued a curfew they completely ignored and per some reports coming out of the war zone, there are more people than previous nights out on the streets.

The State Police as well as National Guard were deployed to keep order but they have been chased away by the mob!

The is the crowd celebrating after the riot police and National Guard abandoned the perimeter that had been set up around the 3rd precinct station. pic.twitter.com/OBRkKR8Wu5 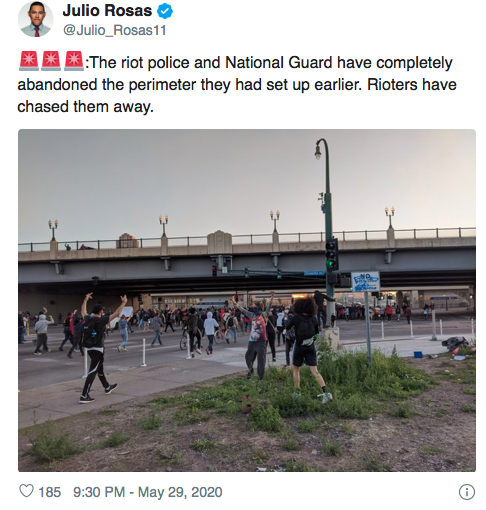 This is the crowd celebrating after police and the National Guard abandoned the perimeter that had been set up during the day. pic.twitter.com/8LmeEgYYTp

This is what happens when you allow chaos day one, then two going so far as to surrender a police station the Mayor said was an act of strength not weakness!!

Had police cracked down on the first ones who started attacking and destroying property the message would’ve been made clear to the others. But since the leadership… PROGRESSIVE DEMOCRAT leadership has backed down this is what you get.