As America goes into the Labor Day weekend the govt released employment numbers showing no growth and pushing a deceptive claim the unemployment (UE) rate remains unchanged at 4.9%.

These are the federal govt’s BLS numbers STR did not make them up. These numbers continue to prove without a shadow of doubt the US economy continues to flat-line. There is no economic recovery as pres obama claims. 151K jobs were created in August, when we need to see at the least 400K per month, is not an indicator of recovery. The majority of jobs being created are part-time no thanks to this admins anti-capitalist position via taxes, regs (ie EPA) and the damaging after-effects of obamacare.

The real unemployment rate of 23% continues to sit just under the Great Depression era level of 25%. Take a look at this graph as the number of people who left the workforce increased the govt UE rates decreased.

Those who are long term unemployed the jobs you had are not coming back. Companies have learned to operate with a smaller staff after the 2008 crash, assigning more responsibilities/ duties/ work to those who are fortunate enough to keep/ have a job. Businesses have wised up removing the middleman going direct to customer to cut costs and remain competitive in a down economy. There are less jobs available, people are making less, paying more because we are in a stealth depression.

This will never be admitted or acknowledged because, as explained numerous times here, to just say the economy is in a depression would cause financial markets to collapse.

It is the equivalent of telling a family a loved one on life support who is brain dead is showing signs of recovery giving them hope. If you tell them the truth their world will obviously fall apart. Same is true with this govt and the economy. They keep saying the economy is weak but we’re in a recovery to give people hope when they should really be preparing for a fall when economic bubbles finally burst.

Student loan debt is in the trillions. Exactly how are students going to pay their debt back when the job they’re being trained for in college doesn’t exist?

The Fed has lent out entirely too much money at 0% interest rates devaluing the dollar for years! Because of that we’ve had a small boom in housing but remember people are buying homes who are just able to make the payment at 2-3%, what happens when rates go up to get all that printed money out of circulation?

The stock market is hitting new highs, but who is making all this money? It’s not like how it was in 2000 (mind you that blew up). Some argue the new highs are a result of companies buying back their own stock to boost prices. Many companies also have high valuations because they’re sitting on a pile of money, they’re not re-investing into new business and employees but for whatever is coming down the road.

The US is now $19.5 TRILLION in debt and that’s just the tip of the iceberg. When you factor in unfunded liabilities, Social Security on its way to zero etc we’re in a ton of economic trouble. 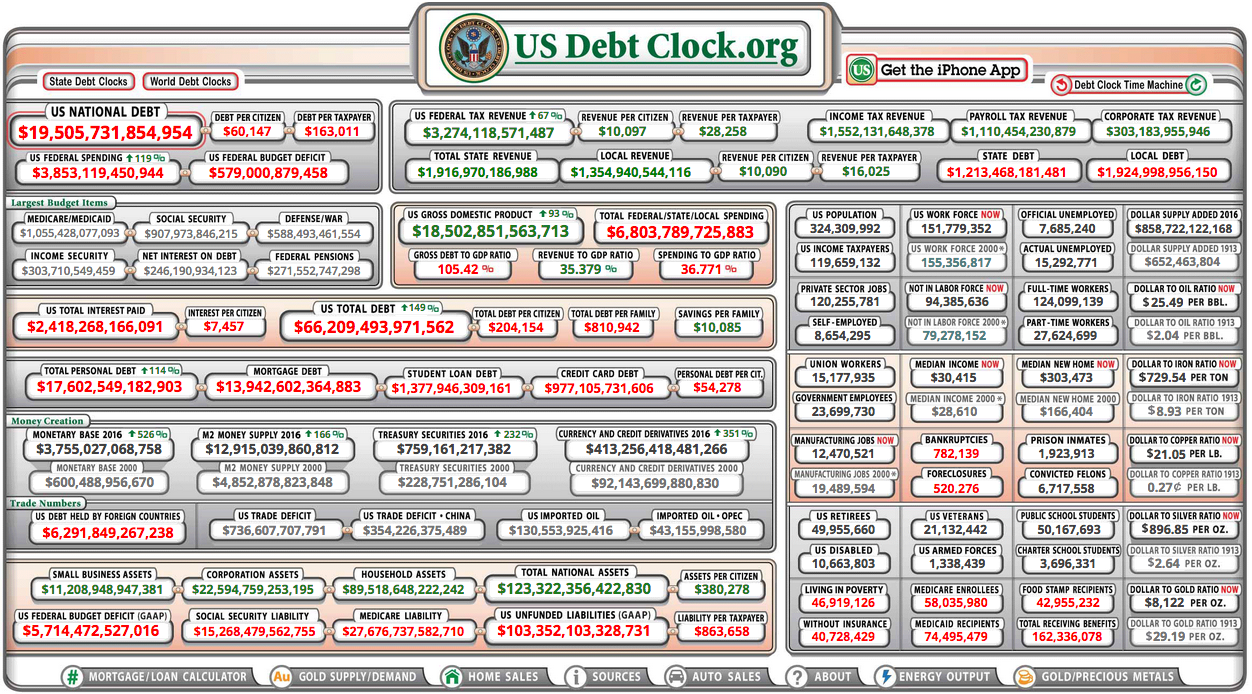 There is NO WAY to fix this problem, a reset is inevitable we just don’t know when because the Fed and leaders keep doing stupid things like Quantitative Easing, aka printing money, to delay a major economic crash. They should have let the walls come down in 2008, instead they made matters worse.

Posting about this is like beating a dead horse at this point. Either you know this economy is in shambles and a day of reckoning is coming (as econ experts are warning) or you believe everything is sunshine and rainbows while the world burns around you.

Prepare for the worst hope for the best.