Jesse Watters had the unfortunate pleasure of interviewing antifa member Kevin, representing the “Boston Branch”, who is behind an open letter calling for violence with the hopes of ousting Pres Trump! When confronted about the acts of violence committed by antifa nationwide, Kevin claims the anti-fascist FASCISTS are peaceful who only turn violent in self-defense when they’re attacked at their peaceful protests! 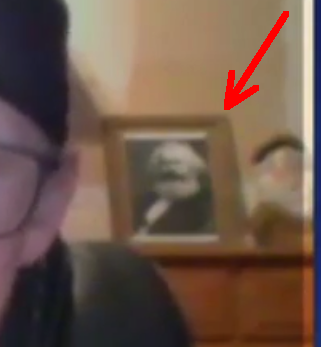 As you would expect the answers and absurdity had no end from this communist, who had a framed photo of Karl Marx behind him! Here are a few “genius” statements this tool of the left came up with:

– Right wingers are committing all the violence (assault, firebombing, destruction of property etc) we’ve seen over the last couple of months. In other words he is more or less suggesting Right-Wingers have infiltrated and are masquerading as antifa committing violence so he and his ilk are blamed!
– The police horse that was stabbed deserved it because it is a racist Trump supporter > being a tool of the police who side with Trump…. (Yea he said it, don’t even)
– Kevin is a Hillary voter. He wanted to vote for Bernie but the DNC screwed Sanders so the little communist had to vote for Hillary to stop Trump.
– Says antifa’s end goal is to “smash the fasc”… yes the same person who just said antifa is peaceful wants to destroy those with opposing views.

Antifa are just the newest foot soldiers the left has created in the age of Trump. They are no different from all the other groups we’ve seen over the years, all of which are domestic terrorists.

These radicals are dangerous and should be dealt with by law enforcement as they’ve made it clear their mission is to use violence to get their way.

Side note: Kevin didn’t want to give his last name after the Trump vs CNN meme creator was doxxed… Well, someone should explain to this child that putting yourself on national television isn’t what one does if they want to maintain anonymity! Give it a few hours or a day or two, we’ll know everything about this little twit.