The Left’s new weapon, David Hogg, is quite the snowflake who can’t take one bit of criticism. Laura Ingraham simply tweeted out a link to a DailyWire piece adding to its headline Hogg “whined” about being rejected from four schools.

Ingraham did nothing wrong, she told the truth because Hogg does whine in the TMZ video, talking with Harvey Levin. 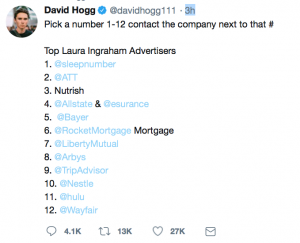 Following this, the baby gun grabber/ useful idiot posted a list of Ingraham’s advertisers, where his rabid following, in brownshirt style, began harassing the companies.

These co’s have since cut ties with Ingraham:

While many on the Right disagree, Ingraham issued an apology the child would not accept until she more or less condemned how Fox is treating the Parkland activists seeking to undermine the Second Amendment!

Any student should be proud of a 4.2 GPA —incl. @DavidHogg111. On reflection, in the spirit of Holy Week, I apologize for any upset or hurt my tweet caused him or any of the brave victims of Parkland. For the record, I believe my show was the first to feature David…(1/2)

I 100% agree an apology in an effort just to save your advertisers is not enough. I will only accept your apology only if you denounce the way your network has treated my friends and I️ in this fight. It’s time to love thy neighbor, not mudsling at children. https://t.co/H0yWs4zMGk

America some may say what Ingraham did was mean-spirited, but in no way was she bullying Hogg, yet that is exactly how the left is labeling her. Your impression is already tainted, but if you haven’t watch the video, you’ll most likely get the same impression many of us did that he was in fact whining. Maybe you won’t but that does not give this kid, a PUBLIC FIGURE, the right to attack ones income.

Journalist Dania Alexandrino spelled it out clearly, and you should call these companies for cowering to Leftists tactics.

The moment he became an activist and started appearing on national TV defending his agenda, he became a public figure. Public figures are subject to public and media scrutiny whether they like it or not. Simple as that. And that is independent from whatever tragedy he endured. https://t.co/3QBs1hZQqs

Advertisers should stay out of it and not take any side. The moment they do take a side, they satisfy those who are bullying them to do the their will not realizing there is a flip side. These companies that have parted from Ingraham are still going to feel the pain because by taking sides they just pissed the other side off. Let me say it a little more clearer, these companies are siding with those who are being used by much larger organizations who want to take your rights away!

These companies want your money, don’t give it them. Buy a competitors products and services, boycott any company who bows down to Hogg and his Soros/ Bloomberg backed handlers!