Chuck Schumer has been doing what you would expect from a New York elitist in the Senate – criticizing and attacking Pres Trump over how he’s handling the pandemic. As the back and forth escalated, Trump fired back at Schumer in the early am explaining “that we do have a military man in charge of distributing goods, a very talented Admiral, in fact.”

Somebody please explain to Cryin’ Chuck Schumer that we do have a military man in charge of distributing goods, a very talented Admiral, in fact. New York has gotten far more than any other State, including hospitals & a hospital ship, but no matter what, always complaining…..

That of course went to deaf ears in the Schumer camp where the Senate minority leader sent an official letter calling the Trump admins handling of the distribution of supplies “confused and uncoordinated.”

Dear President Trump:You need to designate a senior military officer as “czar” with broad and government-wide authority to lead both production and distribution of desperately needed medical equipment NOW. pic.twitter.com/h92q37OZrM

Chuck hasn’t been paying attention or he’s been too concerned with impeaching the President and winning the election to know what’s actually going on. The President went ahead and sent a letter of his own spelling it all out and making it clear “If you spent less time on your ridiculous impeachment hoax, which went haplessly on forever and ended up going nowhere (except increasing my poll numbers), and instead focused on helping the people of New York, then New York would not have been so completely unprepared for the ‘invisible enemy’. No wonder AOC and others are thinking about running against you in the primary. If they did, they would likely win.”. 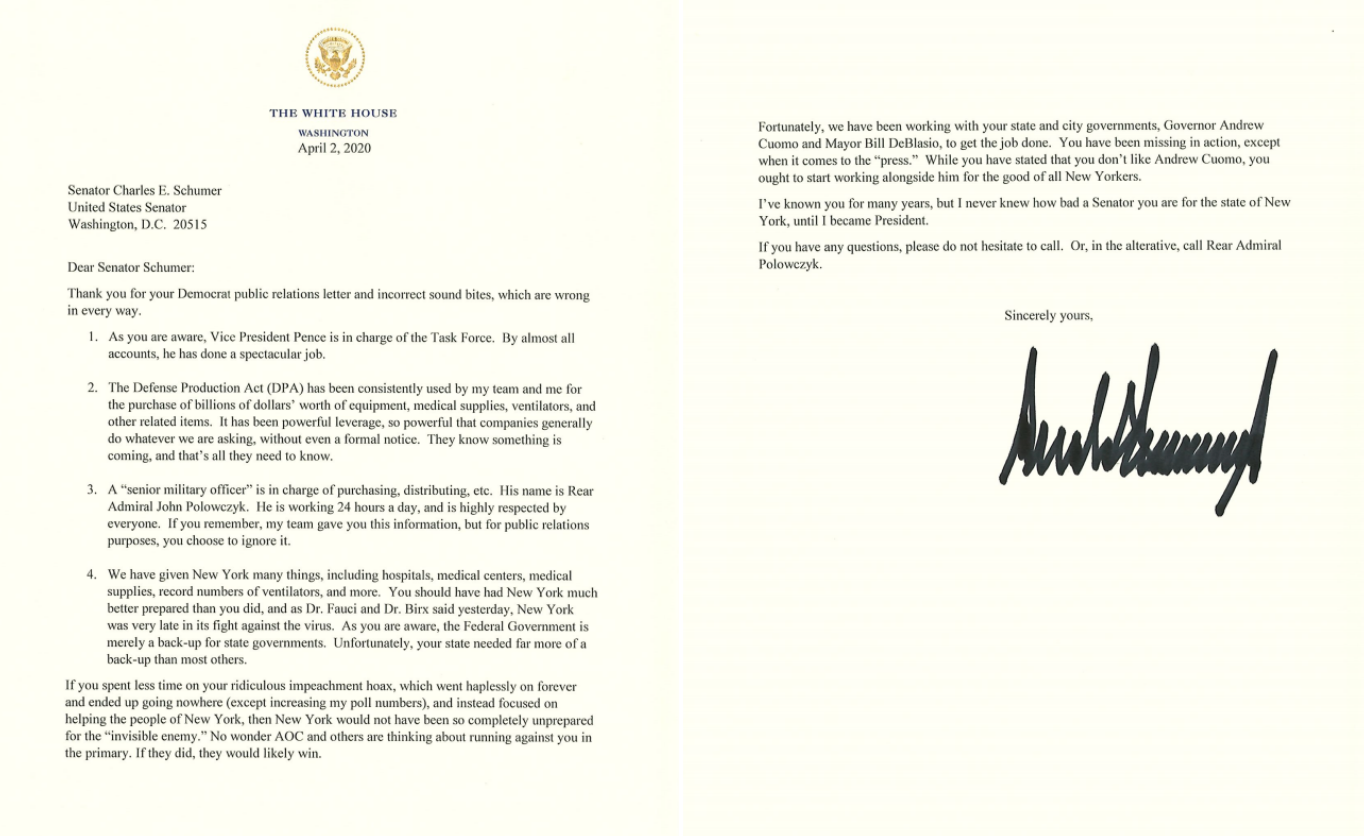 Every single time the dems take a shot at Trump he hits them back twice as hard defending himself; as he always does. The dems constant attacks are not helping anyone. They, and their hitmen in the media, haven’t done anything productive in these uncharted times. Dems are repeatedly demonstrating they are dangerous with the degree of power and control they currently possess. Don’t allow them to hold one more seat in Nov and send as many as possible packing… unless you want these monsters running this country!?