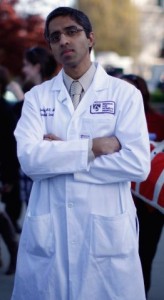 Another Christmas gift to the American people from the corrupt lame duck Senate, under EVIL Harry Reid, confirming Vivek Murthy as the next Surgeon General. This is the guy who said “guns are a health care issue”…

Aside from Murthy being completely anti-gun he has no legitimate experience in medicine to qualify being Surgeon General. He is not an expert in any field of medicine, because he is as Sen Barrasso said an activist:

“The majority of his career has been spent not as a doctor treating patients, but as an activist. An activist focused on gun control and political campaigns.â€

Two years out of his residency Murthy started Doctors for Obama (America) to help his majesty get elected. Most MD’s in his position would pursue their field of choice to help the sick or do research but not this guy. This is the doctor you would see where right after you would be on the phone before getting a foot out of the office looking for a second opinion! But this is what we are left to expect coming out of this Senate routinely appointing unqualified political activists into positions of power. The election of obama set the precedent that one no longer needs experience to hold high office. Community organizers, political activists, billionaire puppets are the only qualifications needed now.

The Second Amendment is not open for interpretation or to be treated as the cause for “health issues”. I told you all before I’ll say it again: obama will never touch the Second Amendment directly, he will tax, legislate and regulate our last line of Checks and Balances against tyranny right out from under us because the certified idiots in Congress will rubber stamp his agenda. Just when you thought the assault on 2A was over a new battle is brewing…

Senate confirms surgeon general despite gun group opposition
by Sarah Ferris | The Hill
The Senate on Monday confirmed Dr. Vivek Murthy as the next surgeon general of the United States over the objections of gun rights advocates.

Murthy, a 36-year old physician, was approved 51-43 as the nationâ€™s top doctor despite opposition from the GOP for his support of gun control and ObamaCare. Three Democrats voted against him, while Sen. Mark Kirk (Ill.) was the only Republican to vote in favor.

President Obama hailed the vote and said Murthy will â€œhit the ground running to make sure every American has the information they need to keep themselves and their families safe.â€

â€œCombined with the crucial support for fighting Ebola included in the bill to fund our government next year, Vivekâ€™s confirmation makes us better positioned to save lives around the world and protect the American people here at home,â€ he said.

Murthy’s nomination had been held up for more than a year after conservative groups, led by the National Rifle Association, publicized tweets in which he called guns a â€œpublic health issue.â€ He had previously declared support for policies such as background checks and ammunition limits and accused members of Congress of â€œplaying politicsâ€ with guns because they were â€œscared of the NRA.â€

Lobbyists for gun groups, including the National Sports Shooting Foundation (NSSF), had been applying pressure to Senate offices over the last two weeks to try and stop Murthyâ€™s confirmation.…more