Ilhan Omar was campaigning for Bernie Sanders in as she happily cited “terrified of the kind of movement that Sen Sanders is building”. She’s right People are afraid of the movement Sanders is building, because of the chaos and destruction it will bring to this country.

Sanders has no record to stand.. he has NEVER held a job or ran a company. His wife ran a college into the ground. He’s a career politician who has gotten rich while condemning the rich!!

The only people Sanders is beholden to are unhinged violent Leftists who vowed to attack police and burn cities if he doesn’t get the DNC nomination and Pres Trump wins re-election. Antifa, BLM, and all the other violent Leftist groups infesting America tolerate and support him, many say he isn’t extreme enough!!

Sanders policies against corporations, Wall St and the rich “to pay their fair share” will cause and economic catastrophe. 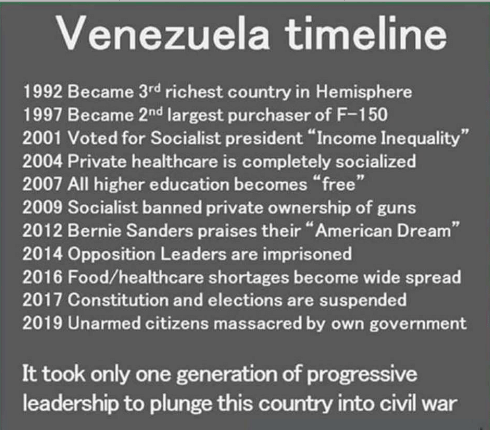 Socialism does not work in a country built on capitalism/ freedom. Venezuela is the perfect model of how quickly and destructive these policies work implemented “for the people”.

No one wants the govt running their healthcare – we’ve already seen how that works with obamacare and the Veterans Admin!

Green New Deal will destroy what hasn’t been taken out with his assault on corporations… and to this day not Leftist has explained how taxing and regulating companies out of business will help the environment by a nation that is NOT responsible for the pollution these ecoterrorists accuse the US of. China, India, East Africa ARE THE main polluters NO ONE on the Left is calling out.

Look at her smile, Omar loves all of this while attacking anyone who calls her a socialist!